You are here: Home » Archives for smile

Who would have ever thought changing health insurance companies would cause such a stressful day?  Apparently, my naiveté was responsible for yesterday’s tiring experience. Upon attempting to get a prescription refilled for the first time on our new insurance, I was told I had no prescription benefits. Well, since we have a fairly nice, shiny new policy, I did the only thing I could.  I got mad.  I didn’t take out my anger on the pharmacy tech (who apologized profusely over what was going on).  No, I prepared myself to let the health insurance customer service agent truly have it.  I dialed the number, and many frustrating automated prompts later, I was warmly treated to

Here I was in line at the pharmacy window and this new company, who had so gladly accepted my first premium payment, did not even have the decency to put me on hold? My anger level had increased from a simmer to a boil.  I came home and sat at my desk, dialed again, and finally was placed in the queue.  The next escalation of my frustration came when the robotic voice said my hold time was likely to be “in excess of 60 minutes.” Now, I had left simmering and boiling, and had moved straight to explosive!  Especially since the hold music I was forced to listen to only had two songs, both of which could only be described as terrible elevator music.

I tried to get some work done in the meantime.  I tried to settle down.  But, the longer they made me wait, the greater my headache grew.  It was around the three hour mark in my hold-time journey that something snapped in me.  All of the sudden, my thoughts were not on how rudely I was being treated, but on how rough of a day the customer service reps were having.  The job of these representatives is to listen to people complain all day long, and here they were with a hold time that they had no control over.  Imagine the screaming and yelling that had been directed at them all day long.

And, when, at the three hour and twenty-three minute mark, Trevor answered the phone, I was no longer angry.  I even tried to empathize with him by asking him if he was surviving this tough day.  His answer, “You’re the first person to ask.  I’m hanging in there, but thanks for asking.”  He fixed my problem, and the pharmacy was able to process the refill (for free due to my new benefits, I might add).  Just before I hung up, he wished me a good day, and I know I heard a smile on the other end of the line.  Maybe it was a smile that helped Trevor survive the rest of the day.  I pulled my emotions back in line, and instead of ruining someone else’s day, I made his day better.

What would the world look like if making someone else’s day brighter was our daily goal?

I love 7th graders! I mean it! They are some of the best audiences I’ve ever had, and I love their zest for life. Yesterday, I spoke to the “Dragons” at Dawson Middle School and today, it was also the “Dragons” from Carroll Middle School. Not only are these the most well behaved students I’ve ever spoken to, but they are also full of smiles and laughter. Motivating them? That was certainly an easy task! These kids are great!

I challenged each school to participate in “Smile Day” on Monday. Each student in the two schools has been given the task of smiling all day long this coming Monday in an effort to act their way into feeling happy. I give them this challenge to experiment with on a Monday because that’s the hardest day to smile, and if you can be happy on a Monday, you can be happy all week long. Happiness is a choice that each and every one of us has to make every day, and these students will CHANGE the attitudes in their schools if they succeed in smiling all day on Monday.

Last Thursday and Friday, I was given the opportunity to speak to 7th graders from Dawson Middle School and Carroll Middle Schoool (both schools have a dragon for their mascot) in Southlake, TX.  The students were very respectful and asked lots of great questions, but more importantly, they were very receptive to the message of living happier lives by choosing happy, positive attitudes.

They have been challenged (as I do at every school) to smile for an entire day on the Monday they return from Spring Break.  I call it “The Smile Experiment” and students who smile are changing their schools all over this country.   Here is a great picture of some special students at one of the schools: 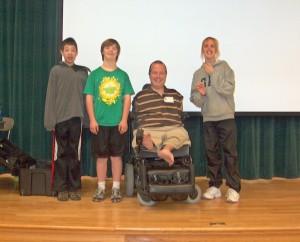 I encourage you to watch this clip to see how you can “use what you have instead of complaining about what you don’t have” which is one of the lessons I gave to the students:

Save the Cheerleader, Save the World

Posted by Chet McDoniel    Posted in Thoughts and Beliefs    Posted in October 25, 2008    |    Comments Off on Save the Cheerleader, Save the World 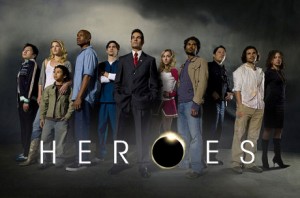 Ok, so I’m almost embarassed to admit that I’m just now picking up on the TV show, “Heroes.”  We bought seasons 1 & 2 and we’re DVR’ing (is that a word?) the 3rd season.  Many friends had recommended the show, and after finding a YouTube version of the 1st episode, I was hooked.  (I even got Joni to watch it, and she’s hooked, too!)

The show has become on of the most talked about TV shows of all time.  The writing is superb, and the story itself is so compelling.  We’ve finally finished season 1, and it is not uncommon for us to block a couple of hours to watch multiple episodes in a row.  It’s that good.  But that got me thinking…why is it that good?

We watched the “Making of Heroes” on the final disc last night, and I got my answer.  The show’s creator, Tim Kring, said that the show is so popular because it is based on everyday people becoming more.  Living a life with a true purpose.  These normal people discover they have super-human powers, and have to choose how to use them.

We all strive for a life with purpose and meaning, and none of us have “super-human” powers.  Our lives can, though, have a meaning.  We can make a difference in the world.  In one of my talks, “The Smile Experiment” (which is great for schools, by the way), I show people how simply smiling at a stranger can really change that person’s day.  And, how, if you change one person’s day, then you’ve touched all of the people they encounter that day as well.  A smile is contagious and it passes on from person to person.

We can all make a difference in our world by simply taking interest in other people.  You can save the world just by changing one life at a time.

Now, I better not hear a WORD about seasons 2 and 3…we just left Hiro in the middle of an ancient medieval battle.  Once Hannah goes back down for a nap, I’ve got to find out what happened to Sylar!  (Wow…this show is addictive.)