You are here: Home » Youth Speaker

Christian Teens on Fire for God

Posted by Chet McDoniel    Posted in Churches, Thoughts and Beliefs, Youth Speaker    Posted in September 17, 2010    |    Comments Off on Christian Teens on Fire for God

This past Wednesday night, I traveled to Gun Barrel City, TX (awesome name for a city, BTW), to speak at the Spiritual Boot Camp at the Cedar Creek Church of God. While the evening took a turn we didn’t expect so that I didn’t get to present my story (I am returning on August 8 to present), I witnessed one of the most amazing displays of faith I’ve ever seen. At the front of the sanctuary a trash can had been placed on the stage, and that trash can had a label on it marked “Sin and Distractions.” Now, having been to many youth events, I’ve seen this kind of thing before. Usually, teens are asked to write some sin on a slip of paper and walk up to the front to throw it away. It’s a great symbolic gesture, but a gesture was not enough for the teens at Cedar Creek as I soon found out.

Before the event began, I walked up to the trash can and was blown away to see joints, bags of illegal drugs, porn magazines and videos, condoms, and other sinful pleasures. These weren’t words written on pieces of paper, but the actual devices of sin. Throughout the evening during the praise, teen after teen came forward to add to the trash can. With tears streaming down their faces, they would throw in their drugs, magazines, etc, and would immediately be greeted by the other teenagers in the room with hugs, applause, and excitement. The responses were amazing, and they reminded me of a part of the story of the prodigal son. I got a chance to share with the teens for a few minutes at the end and we focused on this statement in the story from Luke 15: 20:

So he got up and went to his father.
But while he was still a long way off, his father saw him and was filled with compassion for him; he ran to his son, threw his arms around him and kissed him.

In this story, a son has squandered all his inheritance in a distant country, and he decides to return to his father to work as a servant as his actions surely would mean he could no longer be called his father’s son.  However, Jesus (who is telling the story) throws a surprise twist and has God (represented by the father in the story) run out and welcome his son home.  I absolutely love this particular statement: But while he was still a long way off, his father saw him. Where does the father (God) have to be in order to see his son returning home?

He had to be on the porch…waiting each and every moment of the day for his son to return.

God awaits for his children to come to Him…and there isn’t a hint of condemnation… His father saw him and was filled with compassion for him; he ran to his son, threw his arms around him and kissed him.

Those teens who were repenting and bringing their sins forward to throw away were not being met by a disdain from Heaven, but rather by a God and a Heaven waiting with open arms and throwing the biggest party ever!  I praise God for His amazing grace!

Disciple Now Speaker – We Are All One

Posted by Chet McDoniel    Posted in Churches, Thoughts and Beliefs, Youth Speaker    Posted in March 10, 2010    |    Comments Off on Disciple Now Speaker – We Are All One 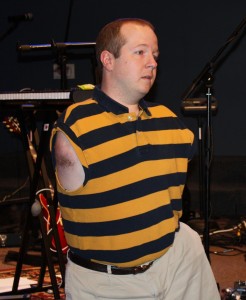 This past weekend, I got to serve as a Disciple Now speaker for Heritage Baptist Church in Texarkana, TX.  We had a fantastic weekend, and being a Christian youth speaker is such an amazing opportunity.  I loved watching the teens worship and praise God with all of their hearts, and was reminded why our worship as adults needs to be as free as theirs was.

Now, I must tell that I am painfully aware of the dissidence between the Churches of Christ and the Baptist Church.  While there are areas of tradition that I treasure, I contend that if you believe in Jesus, then we are in the same wonderful family.  I do not share feelings of animosity, and feel strongly that if we all learned how to stop the arguing and start realizing that we have more in common as believers in Jesus than we have to argue you about, God’s family would be a much happier place.  I love my brothers and sisters that I met with this weekend, and am honored to have been called the same from their perspective.

I tell you all of that to say that their outpouring of love by the church throwing a birthday party for Hannah simply blew me away.  They had a cute cupcake-cake that was formed in the shape of a dog.  (Hannah kept asking me what happened to the dog’s nose…and it felt strange to tell her that she had eaten it!)  We sang the familiar birthday song, helped Hannah blow out the candles, and had a wonderful celebration.  The church members even bought her a baby and stroller set to go along with her collection.  She couldn’t have been happier.

I know all churches have differences, and I am not advocating that we agree on everything.  However, with both myself and the youth pastor at Heritage Baptist being each raised in a denomination that has historically called the other’s denomination a heresy, I can’t help but feel that the kind of love we experienced is exactly what Jesus was praying for in John 17: 20-21:

“My prayer is not for them alone. I pray also for those who will believe in me through their message, that all of them may be one, Father, just as you are in me and I am in you. May they also be in us so that the world may believe that you have sent me.”

I continue to be amazed each and every day with the love shown in the family of God.

Two weeks ago, I got the opportunity to speak at the 2009 Akastasia youth rally at the Southwest Church of Christ in Omaha, NE. The theme for the weekend was “Be Contagious.” We focused on basic elements of being contagious with the message of Jesus.

Saturday night, I gave a reason for us to be contagious. Simply put, God’s unfailing love compells us to live happy, joy-filled lives. That love gives us all the reason we need to be contagious.

Sunday morning, I finished with the “who.” While I believe everyone deserves God’s love and salvation, I am concerned that we not put our own limitations on it by deciding who is worthy of love. So often, people that look like us are easy to accept, but someone who looks different (whether it be race, age, sex, disability, etc) is oftened shunned. Or, worse, the church has flat out rejected them as unworthy. I told the youth and the rest of the church that morning that Jesus shows us time and time again that each and every human being is important to God. We ought to follow his example and leave our prejudices aside when it comes to the Kingdom of God.

The weekend was awesome, and I loved getting to know some of the amazing teens that weekend.

We continued our Nebraska tour by heading to the University of Nebraska at Kearney, which I’ll tell you all about next time. I’ll leave you with a picture from Akastasia 2009. 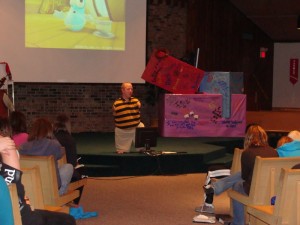