You are here: Home » Archives for Christian teen speaker

Christian Teens on Fire for God

Posted by Chet McDoniel    Posted in Churches, Thoughts and Beliefs, Youth Speaker    Posted in September 17, 2010    |    Comments Off on Christian Teens on Fire for God 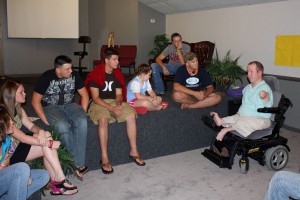 This past Wednesday night, I traveled to Gun Barrel City, TX (awesome name for a city, BTW), to speak at the Spiritual Boot Camp at the Cedar Creek Church of God. While the evening took a turn we didn’t expect so that I didn’t get to present my story (I am returning on August 8 to present), I witnessed one of the most amazing displays of faith I’ve ever seen. At the front of the sanctuary a trash can had been placed on the stage, and that trash can had a label on it marked “Sin and Distractions.” Now, having been to many youth events, I’ve seen this kind of thing before. Usually, teens are asked to write some sin on a slip of paper and walk up to the front to throw it away. It’s a great symbolic gesture, but a gesture was not enough for the teens at Cedar Creek as I soon found out.

Before the event began, I walked up to the trash can and was blown away to see joints, bags of illegal drugs, porn magazines and videos, condoms, and other sinful pleasures. These weren’t words written on pieces of paper, but the actual devices of sin. Throughout the evening during the praise, teen after teen came forward to add to the trash can. With tears streaming down their faces, they would throw in their drugs, magazines, etc, and would immediately be greeted by the other teenagers in the room with hugs, applause, and excitement. The responses were amazing, and they reminded me of a part of the story of the prodigal son. I got a chance to share with the teens for a few minutes at the end and we focused on this statement in the story from Luke 15: 20:

So he got up and went to his father.
But while he was still a long way off, his father saw him and was filled with compassion for him; he ran to his son, threw his arms around him and kissed him.

In this story, a son has squandered all his inheritance in a distant country, and he decides to return to his father to work as a servant as his actions surely would mean he could no longer be called his father’s son.  However, Jesus (who is telling the story) throws a surprise twist and has God (represented by the father in the story) run out and welcome his son home.  I absolutely love this particular statement: But while he was still a long way off, his father saw him. Where does the father (God) have to be in order to see his son returning home?

He had to be on the porch…waiting each and every moment of the day for his son to return.

God awaits for his children to come to Him…and there isn’t a hint of condemnation… His father saw him and was filled with compassion for him; he ran to his son, threw his arms around him and kissed him.

Those teens who were repenting and bringing their sins forward to throw away were not being met by a disdain from Heaven, but rather by a God and a Heaven waiting with open arms and throwing the biggest party ever!  I praise God for His amazing grace!