You are here: Home » Archives for NASCAR Speaker

Life in the Fast Lane

The day started out like most.  Out of bed.  Shower.  Eat breakfast.  It started like most days, but this day would be unlike any other day…

After maneuvering through the race day traffic, we (my dad and I) finally found our way to the NASCAR credentials trailer.  Once we had verified who we were and that we were 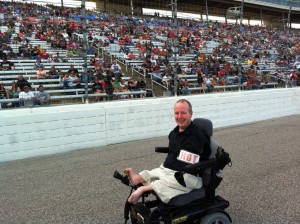 in the right place, our passes were bestowed upon us, and we were led into the infield parking area of Texas Motor Speedway.  Our credentials worn on our shirts said “HOT” in large, red letters.  Although I had wanted it to be a commentary on our looks, the word HOT meant that we had access to wherever we wanted to go…the garage, pit row, the track itself…all access. We aren’t huge NASCAR fans (in fact this was our first race), but being men, we had a blast looking at these cars and watching the frantic pace at which the crews were driving themselves to get their team ready for the race.

Following a tour of the garage area, it was time to go to the tent where the Driver’s Meeting was to be held.  After working out some details for the chapel service that was to immediately follow the Driver’s Meeting, we relocated to a corner of the tent behind the stage in order to be out of the way.  I had pulled over even further out of the way to attempt to update my Facebook status when a man approached me, knelt down beside me, and said, “Hi, I’m Rick Perry!” Rick Perry is the governor of Texas, and I am definitely a fan of his work.  I was amazed that he would kneel down beside me to speak to me as I have often spoken about this kind gesture when I am doing a disability awareness presentation.

We made a few connections, and then he began to tell me about his anti-bullying video/campaign that he is gearing up for…and then he invited me to be a part of it!  I don’t know many details 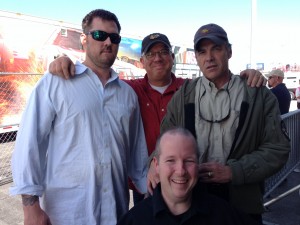 yet, but it will be going to schools all over the state, and he asked me to play a role in the video and in getting the message out to schools.  Then, he said, “Hey, have you met Glenn Beck (former host of the Glenn Beck Show on Fox News)?”  I looked up, and Glenn Beck (who recently moved to Texas) was standing there with a big smile on his face.  The governor proceeded to tell Mr. Beck about this new project and my involvement.  After Gov. Perry stepped away, Mr. Beck and I began to talk about my speaking and my work with the pro-life movement.  We had a great conversation, and I hope to get to be with him more in the future.  Gov. Perry also introduced me to Marcus Lutrell, who is a former Navy SEAL.

Soon, the Driver’s Meeting began and was soon concluded.  After a few minutes of folks exiting and entering, the chapel service began.  We were led in worship by Richard Andrew, and then I was up.  The temptation to water down or soften your message is strong when you are speaking to celebrities.  Many NASCAR drivers and their teams stayed for chapel.  However, I had been encouraged that the people to whom I was speaking used this weekly chapel time as their “Sunday morning worship” as their schedules often preclude them from attending a church during race season.  I prayed for God to use me boldly, and I delivered a message to that race day crowd to challenge them to use their gifts for God.

You can be the best racer today, next week, and for the whole season, but unless you are 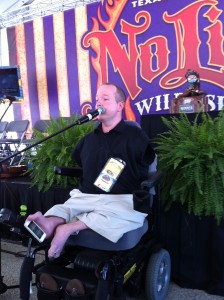 serving God and praising his name in your every day life, winning means nothing.  Perfection in your witnessing and service isn’t what God demands.  He does, however, demand that you try to serve in every way possible.  Many times, we cower away from witnessing because we are afraid we might screw up and fall flat on our face.  So, in order to avoid failing God, we don’t even make an attempt.  After all, wouldn’t making a blunder be worse than not trying?

In Matthew 25, Jesus tells a parable of a man who goes away on a long trip.  Before departing, he leaves his servants some money and he expects them to do something with it.  He expects good stewardship of the funds.  One of the servants decides to “play-it-safe” and dig a hole to bury his master’s money.  Upon the master’s return, he becomes irate with the lazy servant.  His anger burns not because the servant failed to make money with the investment he had been given, but rather because the servant didn’t even try.  Serving God isn’t always easy…nor will you always be good at it.  But, you will bring a smile to your Heavenly Father’s face when you live your life for Him and you make an attempt at glorifying His name.  While the NASCAR drivers and crew members can easily get focused on their sport, my challenge to them was to focus on God and make their lives about Him.

Following the message, I was privileged to lead a song right along with Richard Andrew, and then we got a chance to talk to many of those who attended.  Hearing how dedicated they were to spreading the word of God encouraged me.  Now, though, it was time to get 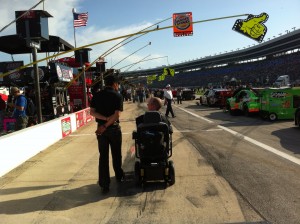 down to business.  We were given a tour of pit row, and invited by some drivers to check out their cars and talk with them before the race.  I even got to take my wheelchair full speed along a flat section of the track.  Following the driver introductions (by Miss Kay and Godwin from the TV show Duck Dynasty), we left the track and watched as final preparations were made for the race.  While it was very hard to see the race from down in the pit, it was not hard to hear it.  I think my ears are still ringing two days later!  Once the green flag was waved, I got to see what speed is all about.  Wow is all I can say.  From our vantage point, my eyes barely had to time to focus on an individual car before it was long gone.  We didn’t stay for very long, but the little amount that we saw was thrilling.

Are you letting God use you?

(Special thanks to Motor Racing Outreach for having me speak at the NRA 500.)