You are here: Home » Disability Speaker » Do You Want Customers With Disabilities?

Do You Want Customers With Disabilities?

What follows is a tale of two businesses.  Both experiences occurred on the same day.  Both were given a fair shot at my business.  One succeeded greatly, and the other failed miserably.

The cleaning of my teeth was finally finished when the dentist entered the room.  This was my first visit to this dentist, and while I’m not going to shame them by mentioning his name or the name of his practice, I will say that he has glowing reviews on several public opinion sites.  The dentist came in and within ten seconds of meeting him, he said the following:

When I saw you come in, I told the hygienist that you likely had poor dental hygiene, and if that was the case, you’d need to see me every two to three months instead of the regular six months.  It turns out you have great dental hygiene, but if that changes because you can’t brush your teeth or no one will help you, you’ll need to come back more often.

There are so many things wrong with his statement that I didn’t even respond until I returned home and called his office.  First, his snap judgement of me was dead wrong.  He assumed that I was unable to brush my teeth before he even talked to me.  This assumption led to several insulting remarks.  Second, the fact that he would tell me about his incorrect first impression is unbelievable.  Making a snap judgement is bad enough, but now you are going to insult me by telling me you assumed I wasn’t capable of caring for myself?  If you guessed wrong, keep it to yourself!  Finally, he wouldn’t let go of his initial assessment.  He guessed wrong, told me he guessed wrong, and then proceeded to try and validate his assessment by assuming that my disability would further limit me in the future.  While that is a possibility, there is no current evidence of that occurring.  He so badly needed his hypothesis to be right, so he further assumed problems that may or may not happen.  The dentist failed in so many ways, that I cancelled a future appointment with him, and will never go back.

(Epilogue: I found a FANTASTIC dentist after searching for a bit, and am very happy to refer anyone to Just for Grins in Keller, TX.  They are awesome!) 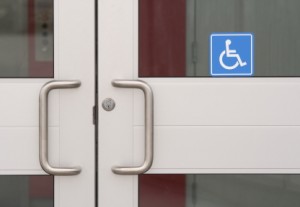 On that very same day, I went to a branch of my bank to which I rarely go.  I was by myself, which meant no drive thru banking for me.  I gathered up my deposit info and rolled out of my van and up to the door of the bank.  Usually, when I approach a business that does not have a door opening button, I get to sit and wait until someone sees me and opens the door.  It can be a little humiliating, and that humiliation grows the longer I have to wait.  So, imagine my surprise when the door swung open just as I approached.  A man whom I’d never met before opened both sets of doors and greeted me kindly.  He introduced himself as Al, the bank manager!  He took my deposits to the back and processed them himself, so that I did not have to wait in line nor did I have to reach up to the tall counter where the tellers are located.  Upon leaving, he gave me his business card and said to call him any time I was coming up, and he would come open the doors.  I’ve already tested his promise on another occasion, and he was true to his word.  He’s the bank manager, yet he has time to open the door for me.  Greatness.

Which One Wanted My Business?

The answer is obvious.  The bank manager desires for me to continue banking with his branch and he shows me that desire by treating me so well.  The dentist was arrogant and rude, and he desperately needs MY Disability Awareness training seminar.  By the way he treated me, he showed me that he did not want me there.  I don’t remain in places where I’m not wanted.

So, the question goes to you.  Do you want my business?  Do you want customers with disabilities?  Then show them you want them.  Begin brainstorming ways to make your customers with special needs feel wanted.  Make your location more accessible, but more importantly, have an accessible attitude.  There is an entire untapped market of people with special needs, and this market will reward your efforts by remaining loyal to your accessible business.

Do you want customers with disabilities?  Then build an accessible business both physically and mentally.  Simple as that.